Max gives the "thumbs up" 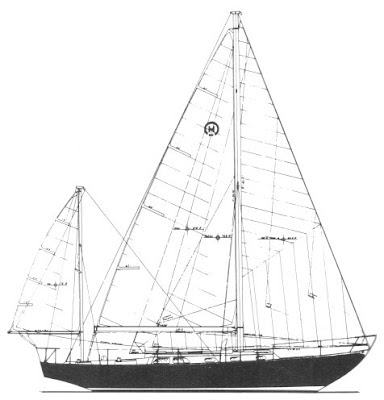 I liked Oceanus from the start, but I had reservations. I always pictured myself owning a more traditional, full-keeled sailboat like two of my favorite boats, the Hinkley Bermuda 40 or the Mercer 44. Although a departure from those two Tripp designs, Oceanus has his classic sweet stern and a strong, no-nonsense bow.

I was a little concerned, however, about the suitability of an old ocean racer for cruising. Would she be seakindly? Should I worry about her spade rudder with no skege to protect it? I put those questions to my English friend Max Taylor in an email.

"What a fantastic boat; buy it now!" Max replyed. "If I was going cruising again I wouldn't hesitate - beautiful and very fit for purpose.

"When Erica and I sailed off the Caribbean it was in a van de Stadt Legend 34 Blue Clipper, built in 1970. Compared with modern boats, she has a narrow waterline, relatively shallow fin and skeg keel arrangement, low-volume sloop. At the time we had no experience and no idea how good a boat she was. In fact, even when I bought her I didn't really know anything about Mr. Van de Stadt and his boats, it was well before I had any idea of taking her offshore but I could see that she had a good shape, was solidly built and I managed to get her for half the brokers asking price!

"It wasn't until after we had sailed her 10,000 miles to the Caribbean and back and succumbed to bigger boat syndrome that we really began to realise how good she was and the qualities that made her so. I make the comparison with our Endurance 35, a heavy displacement (displacement-to-waterline ratio) long-keel cutter which we cruised for several years along the often-stormy English coast.

"I think these comments apply to the Columbia 43 equally. The narrow and relatively shallow hull form is easily driven. So, relative to whatever wind there is, you need less sail area, in light airs you can keep going more easily and when it's rough you can keep going with less, which imparts far less stress on boat, rigging and crew. We hove to in a gale 1000 miles from land for 48 hours under just triple reefed main, the boat was comfortable, quiet and apart from the anxiety of being in those conditions, it was very pleasant, when things calmed down we were able to make good progress to windward under the same reefed main -  by contrast on the Endurance we'd need loads of sail up to get the heavy boat moving.

"What can I say about that flush deck, it's perfect for cruising; uncluttered and safe for working on deck, anchoring, storing the dinghy. The high turned up stern and transom will look fantastic as you row away in the dinghy - then you'll know you bought the right boat. BUT it's also very practical, as the boat pitches at anchor that lovely overhang will submerge and damp the pitching motion and will do it without the constant slap slap slap that a modern boat with a sugar scoop stern has. It was so bad in one anchorage that we had to move away at 3 a.m. from a modern aluminium 44 footer who's fat stern was driving us mad all night. And we were some 25 yards away!

"I guess the downside is the prop is exposed and the spade rudder, if the latter is properly constricted and I have no reason to think it's not on a boat of that age, it should be fine. As a precaution I might be inclined to construct a massively reinforced bulkhead to support the shaft and prevent flooding in the event that you seriously hit something. Plus, get a self steering gear that has an auxiliary rudder like a Hydrovane of Pacific. If all else fails you have a spare! depending on how things are, you could build up a shallow skeg to protect the prop shaft and P bracket plus fit a really good rope cutter.

"One final thought looking at original Columbia plans, is access to the stern gland, it looks like it is under the engine - I'd want to be able to get at it easily and based on personal experience of a PPS type drip- less gland that failed catastrophically I'd want a beefy traditional stern glad with remote greaser.

"The other real thing the Columbia has going for her is speed, she looks fast and that's a relative thing, but fast in her day when boats were seaworthy first and foremost. Mr. Van de Stadt showed that separating rudder from the keel and putting the rudder as far back as possible can give you a boat that will track well and won't have horrid weather helm and so will be easy on the crew, it worked on Blue Clipper. I haven't done any research but the Columbia looks to have similar qualities. The endurance (long keel) tracked like a train going to windward, but on a broad reach the weather helm would pull your arms out of their sockets!"
Posted by Brandon Ford at 5:05 PM