A visit from "Flying Sideways"

Karin and Joe from Flying Sideways, a Columbia 43 Mark III, visited the Oceanus crew on Saturday. The four of us had a wonderful time as they inspected our boat and we peppered them with questions about cruising in Mexico and farther south.

I've written about Flying Sideways before. She is one of the prettiest 43s around. Over the last three years, Karin, Joe and their dog Jack have sailed her from San Diego to Mexico and Central America. The crews of Oceanus and Flying Sideways followed each other's adventures for the last couple of years on each others' blogs. When we finally met in person they felt like old friends. Let's hear it for the wonders of the internet!
Karin and Joe are no strangers to adventure. They are both pilots and skydivers each with thousands of jumps to their credit. For the past three years they cruised Flying Sideways in the winter months and then work for the largest skydiving company in the world during the summer in Phoenix, Ariz.

When they won a trip to Portland, Ore., they rented a car and came to Newport to see us. The conversation was non-stop as they inspected our yacht and we quizzed them about their boat and adventures.

They bought Flying Sideways in San Diego and worked on outfitting her for five months before heading south to Mexico. Their first foreign port was Ensenada, which they gave high marks for easy entry into the country with friendly officials and good services. The first season they explored Baja and the Sea of Cortez. Their second season they explored Mexico's Gold Coast all the way to the southern border.

This last season started with the notion of sailing to Panama and Chile, but the ever-flexible crew of Flying Sideways ended up cruising Nicaragua, El Salvador making it as far south as Bahia Ballena in Costa Rica where "everything started to break: water maker boost pump, dingy engine and solar charge controller." They returned to Marina Chiapas in Mexico to lay up their yacht for the summer.

We enjoyed hearing highlights over Virginia's excellent pot roast. Stories like the time the dropped anchor off Zihautenejo and found they were about 100 yards from the main stage during a week-long international guitar festival.


Their love for the people and places they visited is infectious. Their advice and recommendations: pure gold for us. We can't wait to follow in their wake. We look forward to seeing them again. The sooner the better. From virtual friends to real friends. Karin and Joe, we miss you already. 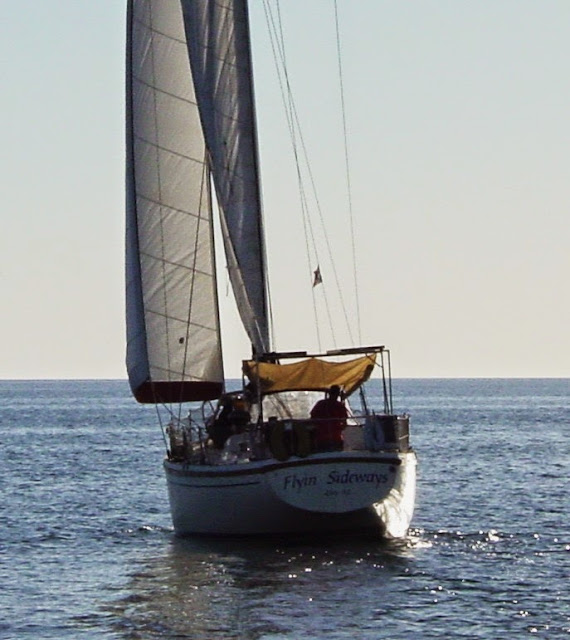