I received a wonderful email from Karen Gray after I inquired about her Columbia 43 Serendipity, which is for sale. I'm always on the lookout for other Columbia 43 owners and their stories. This is a great one and Karen tells it well.

She has lived aboard Serendipity full time for 25 years, but after the death of her husband and now that her daughter (who was raised and schooled on the boat) is leaving for college she's decided to sell the boat and downsize, but Karen tells it much better than I could.

Karen: "I am very much a fan of your blog but did not know how to contact you, so thank you so much for taking the initiative to email me! Having been through so many of the same refit efforts with my late husband Tom that you and your wife have been through (though I must say not with such beautiful results as I have seen on your blog), I get a laugh at some of your comments...most recently the pleasure you took at sanding off the "stupid stripes," which we did in Grenada in 2002, along with several other coats of paint.

Ah, where should I start with Serendipity. She was purchased by Thomas Gray in Boston in late 1986. At that time her name was Swallow. I believe Tom was her third owner. I know little about her history before us, except that she was definitely out of the Virginia plant, and Tom was told she had crossed the Atlantic to the Med and back under a prior owner. Tom had Serendipity laid up in a yard in Winthrop, Mass., stripped of her mast and rigging, when I met them both in 1989 (my little Catalina 22 was a yard neighbor). A retired Navy chief and electronics technician, he was in the midst of replacing all her electrical wiring and electronics when I joined the crew. Serendipity has been my full-time home for almost 25 years. 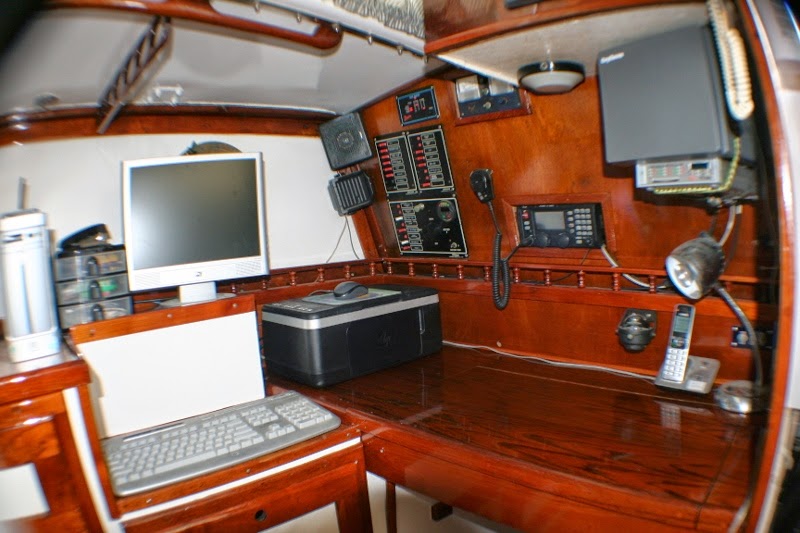 In 1989 we ditched the propane heater in the main salon and headed south to Florida, where we began what was essentially to become a ten-year refit (and you thought things were going slow on Oceanus!). I realize the C-43 could accommodate a racing crew of six, but there were just the two of us back then, and we were living aboard and planning extended cruising.

We didn't need the large dining area opposite the galley; we wanted the nav station and all electronics aft, more accessible to the cockpit; and we needed lots more storage! Other changes were dictated by our "grow your own crew" program - our daughter Samantha was born in 1996. So below decks, we converted the U-shaped dinette into a nav/computer workstation and lots of additional storage space for provisions. I like to cook, so I appreciated the extra counter top space.

We closed off the galley completely from the main salon with bulkheads port and starboard, and a dutch door (so we could close the bottom half when we were in the cockpit and still keep an eye on the youngest crew member securely below).
We kept the upper/lower berths in the salon to port, but added a drop down table (for dining and schoolwork) to starboard. Stowed up it secures the vertical bookshelf next to the mast and opens up lots of space in the salon (important when your six-year-old invites all of her friends over to play).

We also used the underneath of the table as a whiteboard/blackboard combination. The original nav station opposite the head was converted initially into a built-in crib, then a toy box. And we added more enclosed, shelved lockers to the V-berth for clothing storage (without cutting down on sleeping space). To brighten up the entire interior we added two deck prisms in the salon, and a light oak herringbone parquet cabin sole throughout. Tom did all the cabinetry and cabin sole work himself.
To prepare her for cruising (the Eastern Caribbean was our destination), we replaced her Perkins with a new Yanmar 63 hp turbo in 1999, and had a custom boom gallows and radar arch/dinghy davits constructed (the welder who made them for us owned a C-43 in the West Palm Beach, Fla., and used his own boat as a template, so everything fit together perfectly). To these we attached four Siemens 99-watt solar panels and a Four Winds wind generator. We also fully canvassed the cockpit for sun protection and to create additional 'all weather' living space.
Then we went sailing. Tom, Samantha and I cruised aboard Serendipity from Florida to Grenada and back for eight years. In Grenada, her topsides received some much needed TLC - lots of fairing and a spectacular Awlgrip job that still looks good today. We also discovered a corrosion issue with her 60-ft. mast at the keel step, and had the bottom four inches removed, and the mast step reconstructed and raised four inches (so the mast no longer sits in a wet part of the bilge), with no net change in the rigging dimensions. Her standing rigging was replaced at the same time, and the mast has been dry and corrosion-free since then.
Serendipity has been in Florida (we returned as Tom was ill and passed away in 2007). My daughter and I have continued to live aboard when we are not crewing with friends in the Eastern Caribbean half the year. And we continue to work on her. Two years ago, we replaced about 70 percent of her cored deck (which had gone soft in a number of spots). We cut out the deck surface, removed the rotted core, dried the area then painted it with West System epoxy resin, layered new epoxy coated balsa core and woven glass (heavier weights in stress bearing areas), faired it to a smooth finish then resurfaced with Interlux Interdeck. A huge project, but worth the effort.

Last year, after a lifetime aboard and 12 years of boat-schooling, Sam started college. It's time for another couple, or perhaps a young family, to enjoy Serendipity. Like many land-based empty nesters, I've decided to down size. She is in the water in Titusville, Fla., for sale but not listed with a broker. I've created a website for her http://www.columbia43.com with all the specs and lots of photos, or someone can email me at svserendipity@gmail.com for more information or if they'd like to take a look at her."
Brandon: Serendipity has another rare, I believe, feature; a skeg-hung rudder. According to a flyer of standard features and available options for the Columbia 43 from about 1969, a skeg-hung rudder was offered as an option. It looks to me more like the standard rudders on the Columbia 45, which has basically the same hull as the 43. The rudder is just another cool feature of a really cool Columbia 43 called Serendipity.

If I didn't have Oceanus, I would be on a plane to Florida with a check in my pocket. I hope Karen can find new owners who will take care of this classic as well as she, her daughter and husband have.
Posted by Brandon Ford at 12:28 PM