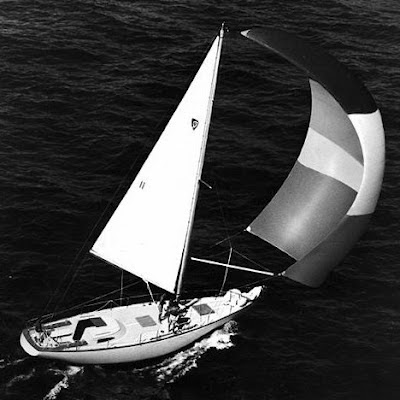 The Columbia 43 is a big, muscular boat made for long ocean races. The boat is largely forgotten now because its birth coincided with the death of the rating rule it was designed to race under.

With a long, flush deck and a low gun-turret house, the boat is easily recognizable as coming from the drafting board of William H. Tripp, Jr., one of the great designers of the Cruising Club of America racing era. Trip designed the Columbia 43 as part of a suite of racing and cruising boats for Columbia that included two of the largest production boats of the 1960s, the Columbia 50 and the Columbia 57. In fact, the first model of the Columbia 43 had a Columbia 50's deck house.
The Columbia 43 is a fast boat. In its early years, a 43 finished first-in-class in the Transpac race from San Pedro, Calif., to Honolulu, Hawaii. As the International Offshore Rating rule took over the racing scene, the Columbia 43 was left behind in favor of boats that would rate better under the new rule. With the popularity of sailboat racing under PHRF, the Columbia 43 is again a contender for the silver.

Columbia also came out with a Mark III model that was even more competitive as a racer. It had a keel with a shorter chord and lead ballast, a modified rudder, and six additional feet of mast height. Columbia also abandoned it's trademark long, low window on the side of the house for this model and substituted two, rectangular ports on each side giving it a mean, pillbox look. 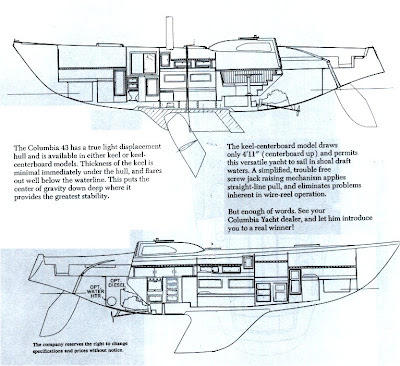 Tripp's name is synonymous with CCA racers that have centerboards, so, naturally, there is a centerboard version of the boat as well. It has an additional 1,300 pounds of ballast and a minimum draft two feet less than the keel version.

The boat was well laid out for racing with a galley to port and a U-shaped dinette to starboard, a step down takes you to the main saloon with facing settees that convert to four single bunks. Forward of that is a small head to starboard with a large standing chart table and a V-birth in the forepeak, The arrangement is somewhat less desirable as a cruising boat for a couple, but it is still workable. The boat also carried 50 gallons of fuel and 50 gallons of water, about half of what you would want on a cruising boat that size.

Columbia built 153 of the 43s: about a third at its yard in Portsmouth, Va., and the rest in the Costa Mesa, Calif., yard. A smaller number (about six) of the Mark IIIs were built. The longevity of heavy fiberglass construction means most are still sailing.

At least one Columbia 43 has circumnavigated the globe. Other boats ended up scattered across the world in the Mediterranean, Caribbean and the islands of the Pacific as well as in every coastal state. A 43 in Aruba takes out 22 passengers for day sails; a job it's done every day for more than 30 years under two generations of owners. The large deck and 10-foot cockpit comfortably handles all 22 passengers. A tough boat indeed.
Posted by Brandon Ford at 7:50 AM 1 comment:

Columbia 43 by the numbers

Numbers can tell you a lot about a sailboat and how she will perform. Here's the Columbia 43 by the numbers:

Posted by Brandon Ford at 8:19 PM No comments: