We had a great time Saturday at the Progress Party. It was just the shot in the arm we needed to keep up our enthusiasm for rebuilding Oceanus.

A big thank you to all of you who came and made the appropriate "oohs and aahs" over the work done so far. Many others emailed with regrets that they couldn't come and we appreciate that too.

Without question the stars of the show were the cushions my wife and her friend Joi made. Second billing had to be the work-of-art pillows Joi made. The cushions and the pillows made a guest appearance for a limited time only so I don't mess them up with sawdust, dirt, winch grease, paint, epoxy or you-name-it while I continue to work on the boat.

The Columbia 43 proved she could be a great party boat along with her other long list of attributes. At one time we had nine people in the main saloon and six or seven people in the cockpit and it didn't feel at all crowded. In fact, we could have easily added a half dozen more and still had some elbow room. And that with no one on the capacious dance-floor of a foredeck.

Getting ready for the party was rewarding for us as well. In addition to seeing the cushions in place and sitting on them (they are super comfy), we got to play house by putting galley utensils in place and trying out baskets and other items we've purchased for the boat.

We even made up the master stateroom bunk with a bedspread and pillows Virginia found at Bed Bath & Beyond. The color and the coral motif matched the colors in the boat and our love of coral reefs perfectly.

The whole experience reinforced how eager we are to finish the boat so we can move aboard and go sailing. Sometimes we would stand with our arms around each other and sigh, thinking about how nice it will be.
I wanted to take photos of the party but once people started arriving I got busy running my mouth and forgot all about it. I think my friend, Doryman, too a few photos. Maybe he will share one for the blog. I did take a video that I had to cut short when the first guest arrived. I uploaded it to YouTube here.

Posted by Brandon Ford at 7:58 PM No comments:

A Columbia 43 Mark III, the StumppyJ, finished the 2013 Transpac race on July 22 with an elapsed time of 14 days, 11 hours, 33 minutes and 35 seconds according to the Transpac web site. The skipper and owner is Ed Stumpp.

The StumppyJ raced in Division 8, the same division as another, more-famous old timer, the 52-foot Sparkman & Stevens yawl Dorade. Built in 1930, Dorade won the Transpac in 1936.

Matt Brooks, the current owner and skipper, bought Dorade in 2010 for $880,000 and poured more money into her to update her and make her competitive. It paid off with a Transpac win on corrected time.

My guess is that Ed Stumpp paid less than that for StumppyJ. Although he most likely spent some serious money for new sails and other updates, it was modest in comparison to Brooks.

I hope to interview Ed Stumpp and post more later. Stay tuned.
Posted by Brandon Ford at 6:39 AM 1 comment:

Progress Party: AKA Halfway There Party

Progress Party
Brandon and Virginia have had Oceanus for a year. Come see the progress we've made.
(It could be your only chance for several months to see the new cushions in their rightful place.)
Drop by any time 1 to 4 p.m. Saturday, July 27.
Slip number 46, A Dock, South Beach Marina, Newport, Ore.
We will have snacks and soft drinks. Oceanus is a dry boat, so no beer or wine please.
Comments on shoddy workmanship or how much work we have left to do are grounds for walking the plank!

For those blog readers who can't make it, I plan to post some pictures. Stay tuned!

Posted by Brandon Ford at 9:03 PM No comments:

Updating a Columbia 43 Galley: Some Projects

I finished several projects in the galley: I insulated and covered with thin plywood the hull behind the stove and counter top, put drawers in the peninsula, made a knife rack and installed the counter top.

I dread anything where I have to mix up epoxy so this is one project I'm glad to have over. I also wasn't sure if I could make the thin plywood work in this application because plywood will only bend one way. After checking the hull in this part of the boat it seemed to me that plywood would work.


Virginia wanted something behind the stove and sink that would be easy to keep clean and repaint when the time came. That ruled out the wood ceiling like we put in the rest of the boat. We thought about Formica or some kind of plastic and decided that 1/4-inch plywood painted with white enamel would be the best solution.

I epoxied 3/4-inch thick mahogany strips to the hull and covered them with 6-ounce fiberglass cloth set in epoxy. The strips will give me enough clearance for 3/4-inch thick closed-cell foam insulation and will provide a place to secure the plywood. 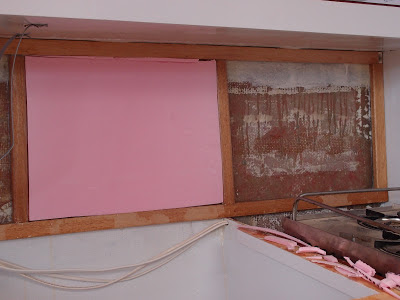 I cut the foam to fit each of the cells. I then measured and cut the plywood. I was a little nervous because this looked like it could be tricky. Bless Jason's (the previous owner) heart, everything was square and I cut a perfect fit on the first try. I screwed the piece on using finish washers.The screws and washers will show, unfortunately, but once painted, they didn't look too bad.

I found a set of three drawers in Ikea that looked like they would fit in the peninsula of the galley. Sure enough, with a little shimming and a little trimming they fit great. I thought Jason was familiar with the Ikea drawers and built the peninsula so they would fit, but he swears he wasn't.
I made the door from African mahogany and used 1 1/2-inch honched tenons that I then pinned with a maple dowel. This door will stay together forever.

Another project was a knife rack cut into the trim piece against the hull behind the counter top. This was an idea that Virginia liked from Lin and Larry Pardey. We saw it on one of their videos and they had more information in a book and on their web site. Called Taleisin's simple, in-counter knife rack, it's simply a slot made by a saw kerf long enough to accommodate all you knives with short pieces of dowel glued into the kerf to separate the knives. It was simple to do and looks to be very handy.

But the most dramatic change to the galley came when we installed the counter top. I cut the plywood to size an then my good friend, Bob, glued the laminate on the top. Bob is one of the best craftsman I know and has done this hundreds of times when he worked as a cabinetmaker. I was really glad to have the help: Contact cement and one-shot chances gives me hives.


I still need to put in three, rounded mahogany corners, wood trim and fiddles, but it sure makes a difference. The pattern and colors of the laminate are beautiful. They pick up the colors in our upholstery fabric perfectly.

Posted by Brandon Ford at 10:09 AM No comments: