While we weren't exactly dreading rounding South Point, we were both looking forward to it with trepidation. This passage is infamous for its difficulty because of the strong winds and currents that are usually present. The winds are so consistently strong that the trees grow sideways away from the prevailing winds.

Virginia watched the weather reports closely and it looked favorable on July 13 so we decided to make a run for it. We wanted to pass the volcano in the dark so we could see the lava flow at night. We figured leaving at around 11 a.m. would be about right. The total passage to Honomalino Bay looked to be about a 23-hours. We decided to do our watch schedule of four-hours on, four-hours off. The wind was almost perfect the minute we got outside the breakwater. Off with the engine and up with the sails.

We always underestimate how fast Oceanus goes. We wanted to be at the Kilauea lava flow after dark, but sailed past late in the afternoon, good for seeing the steam, but not for viewing glowing hot lava. What was beautiful, was the reflection of red from the lava on the underside of the clouds.

The interesting part was the smell. A month earlier, when we were out in the middle of the ocean, we talked about other people's experience of smelling the land before you could see it. We were looking forward to smelling Hawaii because everyone knows how wonderful Hawaii smells. Imagine our disappointment when all we could smell was, what we thought was, petroleum. We never could figure it out until we passed the spewing volcano. There was the smell: an odd petroleum, sulfur-like smell. Lava.

The winds were holding up. We were going about 7 knots and it was pleasant sailing. Virginia had the watch from 10 p.m. to 2 a.m., which put her at South Point near the end of her watch. She was a little nervous because of the horror stories, but she said it was the easiest passage ever. In fact at 1 a.m., while approaching the point, she was so bored she considered calling her night shift nurse friends at North Lincoln Hospital in Lincoln City. Then she realized it was 4 a.m. in Oregon—a really busy time for night shift.

She woke me up around 1:30 a.m. because she needed help changing tacks as we rounded the point. I took over since I was already up.

The 14 wind turbines of the Pakini Nui wind generation project on South Point are each topped by a bright red light, which all blink in unison. Those lights, combined with the blinking white light from the Ka Lae (Hawaiian for the point) lighthouse, made for an enjoyable, ever-changing light show and stayed visible from the boat for almost an hour.

The winds got lighter and Oceanus slowed down, which was a good thing since we won't enter a strange anchorage—any anchorage, really—in the dark. The sky was clear and the ocean fairly smooth. In the waning darkness I saw a green navigation light dead ahead. It didn't seem to be moving, but Oceanus' speed was only about 2 knots by this time. I wasn't worried, but I also kept close tabs on the vessel. I figured it was a fishing boat waiting for daybreak. I was right; at first light she began moving and set a course south and out of my path.

Virginia relieved me a short time later. I dropped into my bunk and seemed to fall instantly to sleep. It didn't last long. About an hour later I felt Virginia shake me awake. She had started the engine, which usually gets me on deck as quick as I can pull on my pants, but not this morning. I came on deck groggy as she peppered me with questions. Finally I had to beg for a moment to get my bearings. According to the GPS, we were outside our planned anchorage, but where exactly it was wasn't clear.

We consulted the cruising guide, but still weren't sure. Finally, after searching the shoreline with binoculars, the instructions made sense. We slowly motored past the rocky reefs and carefully felt our way into Honomalino Bay about 7:30 in the morning.

From the bow of the boat I could see the bottom nearly 80 feet below us. By the time we reached a good anchoring depth of 25 feet I could clearly see the ripples in the sand patch in the middle of the bay. We dropped anchor and set it. I slipped on my mask and fins and dove into the clear, warm water to check the anchor, which was buried deep in the sand.

Beautiful palm trees, black sand beach, sandy bottom perfect for holding an anchor, protected from wind and waves: it was a perfect anchorage and we were the only boat and people in sight.

Hanging in Hilo on the Island of Hawaii

We anchored in Reeds Bay at Hilo on the Big Island for almost a month while we waited for parts and fixing things that broke on our 22-day passage. We found the bay to be a good anchorage and comfortable most of the time. We were also impressed with the great holding. (More about that later.)

We got to know Hilo pretty well. It didn't take long, it isn't that big, but I can't think of any city with a more distinctive character. Once we figured out the bus system, we could easily get downtown to a laundromat, grocery store and a great bookstore. 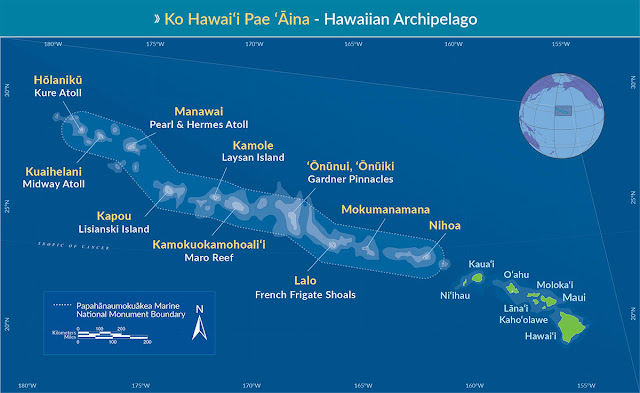 Hilo is also the home of the visitor's center for the Papahanaumokuakea Marine National Monument. Designated in June 2006, the monument encompasses the Northwestern Hawaiian Islands from a little northwest of Kaua'i to about Midway Atoll, covering 4,500 square miles. The coral reefs inside the monument are among the healthiest reefs in the word and 90 percent of Hawaiian green turtles nest on its islets. A national monument has the highest level of protection of any designation, so it requires special permits to visit this area. We enjoyed the exhibits in the visitor's center, especially the 3,500 gallon saltwater aquarium.That the visitor's center is located in Hilo is kinda funny since Hilo is about as far away from the monument as you can get and still be in the Hawaiian islands.

We enjoyed a whole afternoon of poking our heads into the t-shirt and souvenir shops, not to mention the candy shops. One standout was Moonstruck Patisserie, a little French bakery where Virginia had passion-fruit cheesecake and I had the best croissant of my life. It really was love at first bite.

A big highlight during our stay at Hilo was seeing our friends Jason, Renee and their daughter Elli. We visited their beautiful property outside of Hilo where they are building a house. One weekend Renee and Elli spent their Saturday taking us to the Kapoho tide pools to snorkel, followed by hamburgers at their place. We really needed that outing since there are no good snorkel spots within walking distance of our anchorage, that we know about, anyway. Renee also generously lent us her car two different weekends to run errands, go to church and sight see.

One of the unforgettable places we went was the Hawaiian Botanical Gardens. If you ever go to Hilo this is a must see. It was started by a couple who bought 17 acres of undeveloped, garbage-strewn valley on Onomea Bay and spent six year hand-clearing the sight. They turned it into a garden of Eden and opened it to the public in 1984. Tropical plants from all over the world grow here. It's now a self-sustaining non-profit nature preserve and has expanded to 34 acres, much of it held in reserve for future conservation and protection.

From our boat we could see a restaurant called The Ponds. We fantasized for a few days about eating fish and chips there before we finally walked over and tried the place out. Yes, the fish and chips were everything we hoped they would be. We ended up going there twice during our stay.

For the Fourth of July we celebrated by going out to breakfast at Ken's House of Pancakes. It is mentioned in every travel guide and was an easy walk from the bay. It is justifiably famous for the food. We had huge omelets and pancakes with passion-fruit syrup. We left stuffed and waddled back to the boat. That night we watched the firework show over Coconut Island from our boat.

We made friends with Chris, the owner of a little store not far from our boat called All Kine Stuffs. She was nice enough to let us have our replacement alternator shipped to her store. Her store also carried pink wintergreen mints my wife calls headache pills. These candies that are like crack cocaine to her and they are next to impossible to find. (Call her and she can tell you why she calls then headache pills.) We found an interesting round building on one of our walks and decided to check it out. It is the Wailoa Center, a gallery run by an art organization for local artists. We enjoyed the paintings from several different local artists. Most of the paintings were land or seascapes from the Big Island's west side. The following weekend the gallery had a Bonsai show. We walked the two miles to the gallery and saw some of the most beautiful Bonsai I've ever seen—many of them 50 or 60 years old.

Everyone says that all is does in Hilo is rain. We didn't find that to be the case. Maybe because we are from the Pacific Northwest where rainfall of 90 inches a year is no big deal. While it did rain almost every day, it didn't rain all day, just two or three intense downpours, mostly at night. A cruise ship moored in the Harbor every Tuesday. The first Tuesday we were there was the only time I saw it rain nearly all day. It was raining so hard we could hardly see the cruise ship from our boat. We felt sorry for the people on board. We enjoyed watching the cruise ship coming and going, but not as much as the canoe club races, which took place nearly every evening. Most of the canoes were six-person outriggers, but there were also some sleek one-person outriggers as well. Some mornings canoes full of students would paddle past our boat and stop for a visit.
Every time we walked to downtown we passed the Liliʻuokalani Park and Gardens. This 30-acre Japanese gardens is beautiful and felt like something out of a storybook. The park's site was a gift from Queen Liliʻuokalani and was built in the early 1900s. It is one of the largest such gardens outside Japan. The gardens contain Waihonu Pond as well as bridges, koi ponds, pagodas, statues, torii, and a Japanese teahouse.

We planned to leave July 5th but when we tried to pull the anchor up it wouldn't budge. I dove in and discovered it was tangled around a large barnacle-encrusted piece of machinery. No wonder the holding was so great! I also found our prop to be completely encrusted with barnacles after just a few weeks in the bay. The next day I strapped on my scuba tank and untangled the anchor chain and scrubbed and chiseled the barnacles off the prop and other places. Then we waited for a couple more days for favorable winds to get us around South Point. We had heard scary stories about this passage, but that's for the next blog.
Posted by Brandon Ford at 9:18 PM No comments: