Below is a story that I wrote for Good Old Boat Magazine. While it didn't make it into the Magazine, the editor invited me to write a boat review for a Columbia 43. It could not be my own boat so I chose to write about my friend Craig Shaw's beautiful Adios in Portland, Ore. It appeared in the May/June 2019 Good Old Boat issue. Since then I have reviewed two more boats for the magazine.
By Brandon Ford

At the height of his career, a new race boat design from the board of William Tripp Jr. was big news in the yachting world. The Columbia 43 is a case in point. Before the first hull was even built in 1969, Columbia had 21 orders in hand for the flush-decked sloop. By the time the first boat was launched, 60 racing skippers put money down for one.

The 43 did not disappoint. It was an immediate racing success winning several major ocean races in the first few years. Encore was first in class and 11th in fleet when she sailed in the 1971 Transpac from San Pedro, Calif., to Honolulu. Another 43, Blue Norther, was the overall winner in the Ocean Racing Class of the Newport to Ensenada Yacht Race. With 539 entries, it was the world's largest ocean race at the time.

One magazine ad touted the big sloop as the "Magnificent Aggressor" in the headline. "This is undoubtedly one of the most aggressively designed ocean racers ever created by the famed naval architect, Bill Tripp.... Classified as light-displacement, the Columbia 43 exhibits the highest sail-area-to-wetted-surface ratio of any of his designs."

At about 23,000 pounds all up, she would be considered a medium displacement sailboat by modern standards, but during the waning years of the Cruising Club of  America (CCA) rating rule she could be considered light. By comparison, a Columbia 50, an earlier Tripp design with nearly the same waterline length and beam, weighs more than half again as much.

Columbia 43s were competitive even after the racing community adopted the International Offshore Rule (IOR) in 1971, replacing the CCA rule the boat was originally designed to compete under. In 1973 Columbia introduced the Mark III, which added six feet to the mast, six inches to the bow and shortened the boom by a foot to give the boat a higher-aspect ratio rig favored by the IOR. The Mark III also had a redesigned keel moving the ballast lower and reducing wetted surface even more.

Columbia ended production of the 43 in 1974 after producing 152 of the boats. They remain popular because of their fine sailing qualities, strong build, and spacious accommodations.

A Columbia 43 graced the cover of the July 1978 issue of Motor Boating & Sailing magazine. In 2013, a Columbia 43, Stumppy J, raced in the Transpac finishing sixth in its class. (The famous Sparkman & Stevens 53-foot yawl Dorade took first in the same class).

The 43's versatile accommodations plan is well laid out for racing, cruising or entertaining. It has a large, efficient galley to port has double sinks near the centerline of the boat and two large ice boxes. The galley is convenient to the cockpit as is the a large U-shaped dinette to starboard. A former owner of a 43 affectionately called the dinette "our Denney's booth." It can easily accommodate six adults.

A step down takes you forward of the small, gun-turret house and under the large flush deck to the main salon. The facing settees convert into four excellent sea berths. Forward of that is a spacious head to starboard with a large, standing chart table and nav station to port. The V-berth in the forward owner's cabin is large enough that one owner put in a queen-size foam mattress with very little trimming. There are two large hanging lockers, one to port the other to starboard.

The arrangement is roomy and open with lots of headroom (6'4" throughout most the cabin) and it puts four good sea berths in the middle of the boat. The stand-up chart table across from the head has plenty of room for charts and electronics.

The standard boat carried 48 gallons of fuel and 50 gallons of water, but many boats were ordered with the option to double that capacity.

One of the most outstanding features of the boat is its 10-foot long cockpit. It's big, but not too big. Comfortable, dry and secure, it is easy to grind the winches when racing, or snuggle in for a night watch. At anchor, the cockpit can easily accommodate eight people if they are friendly. "This is the greatest cockpit of any boat I've ever been on," said a former owner who lived aboard his boat for 13 years while working in the marine wholesale business.

Columbia built  about a third of the 152 Columbia 43s at its yard in Portsmouth, Va., and the rest in the Costa Mesa, Calif., yard. The longevity of the hand-laid, pre-oil-crisis fiberglass construction means most are still sailing.

At least one Columbia 43 has circumnavigated the globe and another is most the way round.

Blue Norther, the race-winning boat featured in early Columbia magazine ads, became a television star in her 40s. She was the boat Amanda in the TV series Revenge. She appeared in several episodes in the 2012-2013 second season of the ABC television series. There are some nice scenes of her sailing and even some interior shots. In the climactic second-season finale, much of the action takes place on the boat. There is a murder aboard, an explosion, and the boat sinks. The sinking wasn't for real, she still sails on most Saturdays from her slip in Marina del Rey, Calif.

Adios, a 1969 Columbia 43, sails out of Tomahawk Island in Portland, Ore. She has been part of the Shaw family for more than 30 years and is now the home of Craig Shaw. Shaw raced with his father and then as the owner in scores of offshore and local races, including the Pacific Cup races from San Francisco to Hawaii. Dozens of racng awards cover one bulkhead in the boat.

Adios is also a regular in the Baha Haha, a cruising rally that sails from San Diego to the Sea of Cortez every year at the end of October. Photos of Adios and Shaw grace several covers of Latitude 38, the magazine that sponsors the rally. Shaw, who works as a professional yacht rigger, recalls one sail bringing Adios back from 1988 Pacific Cup race. As he headed back home to Oregon, the boat was surfing at speeds up to 15.5 knots under a small headsail only.

Tranquilo, a red 43 in Aruba, takes as many as 22 passengers out for day sails; a job it's done almost every day since 1977, first under Mike Hagedoorn and then under his son Anthony. The large flush deck and 10-foot cockpit comfortably handles the passengers on a four-hour snorkel and lunch cruise.

In addition to the Mark I and the Mark III, Columbia also built a Mark II 43 with a centerboard. Even though it was the largest sailing yacht builder of the time with a 35 to 40 percent share of the sailboat auxiliary market, Columbia would customize boats to meet their customer's needs.

Gerry Waterson saw a brand new Columbia 43 at a boat show and thought it would be perfect for his cruising plans -- except for the deep draft. He didn't want the bother of a centerboard, so Waterson drew up a shallow keel with a streamlined bulb on the end. It reduced the draft from 6 feet, 11 inches to 5 feet. Columbia built a boat with the custom keel for him.

Destiny was Waterson's home for more than a decade. He cruised her to Maine, Nova Scotia, England, the Jersey Isles, Canary Islands, Azores, Windward and Leeward Islands, Puerto Rico, Dominican Republic, Virgin Islands, Bahamas, Turks and Caicos, Bermuda, Florida and the Chesapeake Bay. After all those miles he has nothing but praise for the sea-keeping abilities of the Columbia 43.

After sailing our boat, Oceanus, more than 10,000 miles, that was my experience as well. She is well mannered on every point of sail with a comfortable motion that doesn’t wear out the crew. Best of all, she is a fast passage maker. Without pushing hard, we can easily make 160-mile plus days in all but the lightest conditions. Crossing from Mexico to Hawaii with just two crew took 21 days to cover 2,750 miles. That included three days of loafing along under a poled-out genoa, a light reaching staysail and no main in very light winds.

Columbia 43s love the open ocean. Like other owners, we experienced speeds in the low-teens while surfing on reaches and runs. Far from white knuckling it, the boat practically sails herself and always feels under control. On one memorable run from Drake’s Bay, passed San Francisco to Halfmoon Bay, Calif., we averaged 10 knots for more than an hour while surfing on 16-foot waves. The same day saw 22-foot breaking seas across the entire entrance to San Francisco Bay and the Titans of Mavericks big-wave surf competition. Far from “white knuckling it,” everyone aboard Oceanus, except the helmsman, spent the time napping in the mid-winter sunshine.

Like Waterson, the Hagedoorns and the Shaws, many Columbia owners keep their boats for decades even passing them down to their children. Tom and Karen Gray lived aboard their Columbia 43, Serendipity, for 25 years. Their daughter, Samantha, was born after they began living aboard, under, what Karen calls, the "make-your-own-crew plan." Sam grew up cruising the Caribbean and Florida with her parents. After Tom died and Samantha left for college, Karen put their beloved boat up for sale.
The new owner, Leigh Weber, is an experienced sailor. He plans an extensive refit before taking his family cruising in Serendipity. So, another Columbia 43 passes to a new generation. The aggressive racing boat is proving to be a magnificent cruising boat as it passes the half-century mark. 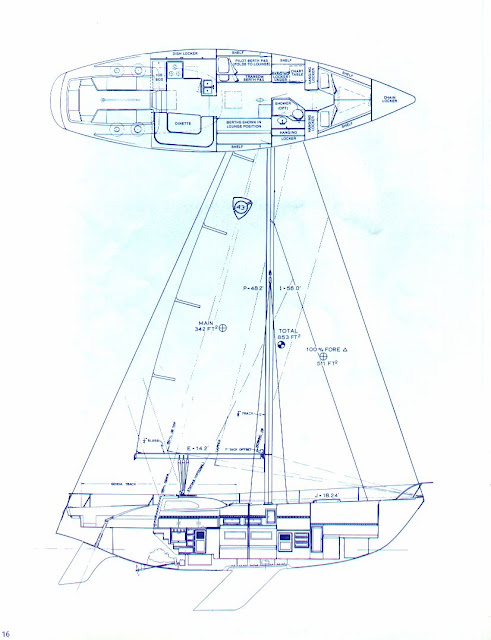