W.S. Merwin's trees are an expression of hope and an attempt to heal the divide he sees between man and nature.

A recurring theme in Merwin's writing is man’s separation from nature. He sees the consequences of that alienation as disastrous, both for humans and the world. By planting a tree a day for decades he reclaimed a piece of paradise that will last generations.
When Merwin moved to Hawaii to study Zen Buddhism in 1976 he bought 19 acres of a failed pineapple plantation. Most of the soil was eroded away. He found about the only thing he could grow on it was Hawaii's native coconut palms.

He worked rebuilding the soil and planting different palm tree species from around the world. Most days he and his wife planted a tree, then he would meditate and write poems. Eventually he had a dense and diverse palm forest where before there was nothing but bare rock and played-out soil.
The forest has more than 2,740 individual palm trees, with more than 400 taxonomic species and 125 unique genera, and nearly 900 different horticultural varieties. It is recognized as one of the largest and most extensive palm collections known to exist on earth, according to the Merwin Conservancy, the group formed to preserve the forest indefinitely.

A couple times a month, members of the conservancy and the professional gardener Merwin hired 10 years ago, lead a free tour through the palm forest. I signed up for one. Virginia and I and two young friends who drove us went to Haiku on Maui to meet with about 10 others for the three-hour tour. It was a fun and beautiful experience.
Our only criticism was the guides need to spend more time walking and less time talking. I welcomed hearing the poetry and the stories, but some of the minutia could be cut to improve the focus.

One good story was about a palm from Madagascar. When a scientific expedition went to document the palms of Madagascar a few years ago, they couldn’t find this particular palm and feared it was extinct. They contacted Merwin (now recognized as an expert in palms, in addition to poetry). He told the biologists he had a few in his forest and would send them some seeds. Later they found the palm growing in an isolated area on Madagascar, but by then they used Merwin’s seeds to help reestablish it in other places on the island. 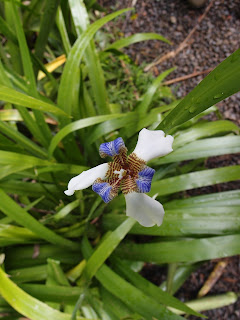 We enjoyed the tour, especially seeing the lush palm forest and the porch behind Merwin's potting shed where he meditates and writes. Like his poetry, the forest he created heals the soul.

what for
not for the fruit

with the sun already
going down

and the water
touching its roots

in the earth full of the dead
and the clouds passing

one by one
over its leaves