Alcyone is distinctive because she was built with a cut down Columbia 50 deck on her. She really looks different, in a custom, cool way. She has a few inches less freeboard, which really makes her sleek looking . Putting a Columbia 50 deck on the Columbia 43 isn't as weird as it sounds. Both boats have the same maximum beam (12 feet 3 inches) and the 50's waterline is only a foot more than the 43. Of course both boats were designed by Bill Tripp.

The story goes that the first hull was sold to the commodore of the Marina del Rey Yacht Club. He was friends with the president of Columbia Yachts so when he said he wanted the new 43 hull with a Columbia 50 deck, that's what he got. It is a wonderful and unique boat with many custom features beautifully executed. David and Betsy have owned her for 12 years. Alcyone couldn't have better stewards.

In Greek myth, Alcyone was the daughter of Aeolus, the Greek god of the wind. A very cool name for a unique sailboat. Read more about her here and here. 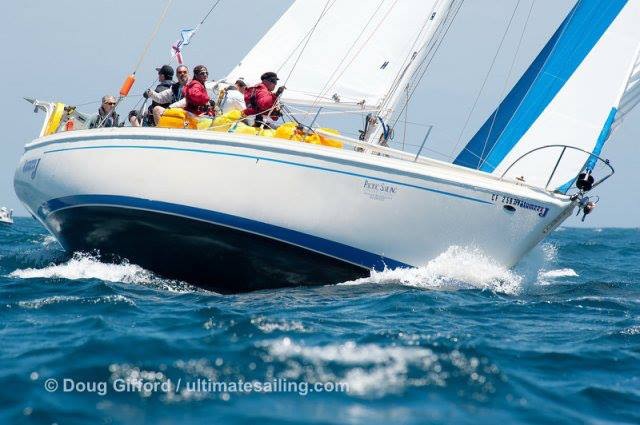 Ed Stumpp, the owner and skipper of the Stumppy J, planned from the time he bought the boat to enter it in the Transpac. He used Southern California races as a warm-up and did well. The Stumppy J made an impressive debut on the ocean racing PHRF Southern California scene with a third-place finish in the 2013 Border Run Race (Newport Beach to San Diego) and a come-from-behind first-place victory in the Catalina Island Series Race Number Four (Isthmus Cove to Long Beach), beating the winner of the Newport to Ensenada race by 35 seconds. Read more about the Transpac race here.

The Columbia 43 Blue Norther can be seen most Saturdays on the waters of Santa Monica Bay not far from her slip at the 1700 finger in Marina Del Rey. You can also see her in the 2012-2013 second season of the ABC television show "Revenge" starring as the sailboat Amanda.

There are some really nice shots of her sailing and even some interior shots. In one climactic episode she even explodes and sinks (not for real, I hope).

One of the weird things about the television show was that a Hinckley 48 played the part of  the sailboat Amanda in the first season. For some reason the producers switched boats in the second season. A Columbia 43 isn't a bad replacement for a Hinckley 48 because they were both designed by Bill Tripp. Read more about it here and here.

Adios, a 1969 Columbia 43, sails out of Tomahawk Island in Portland, Ore. She has been part of the Shaw family for more than 30 years and is now the home of Craig Shaw. Craig raced with his father and then as the owner in several Pacific Cup races from San Francisco to Hawaii. Dozens of offshore and local racing awards cover one bulkhead in the boat. Adios is also a regular in the Baha Haha, a cruising rally that sails from San Diego to the Sea of Cortez every year at the end of October. Photos of Adios and Shaw have graced several covers of Latitude 38, the magazine that sponsors the rally.

Shaw, who works as a professional yacht rigger, recalls one sail bringing Adios back from 1988 Pacific Cup race. As he headed back home to Oregon, the boat was surfing at speeds up to 15.5 knots under a small headsail only.

From the letters section of Latitude 38 magazine October 2008:
WE HIT 15.5 KNOTS WITH JUST A LITTLE HEADSAIL

I hope that you're still accepting reports of top monohull speeds, for in June of '89, while bringing my parents' Columbia 43 Adios, which I now own, back from the '88 Pacific Cup, we hit 15.5 knots. The anemometer was pegged at 50 knots at the time, and all we had up was a small headsail. I was driving and screaming, "F...., what are we doing out here!?" The wind was blowing the tops off the waves and the whole ocean was white frothy foam. The bow came out of the water and there was nothing but spray from the shrouds aft! We made great time in the direction of the mighty Columbia River.

Destiny, a 1971 Columbia 43, was the liveaboard home for Gerry Waterson for more than a decade. He cruised her to Maine, Nova Scotia, England, the Jersey Isles, Canary Islands, Azores, Windward and Leeward Islands, Pueto Rico, Dominican Republic, Virgin Islands, Bahamas, Turks and Caicos, Bermuda, Florida and the Chesapeake Bay.

Gerry drew up a shorter keel with a streamlined bulb on the end to reduce the draft from 6 feet, 11 inches to 5 feet and Columbia built it for him. He also added a club-footed staysail, a large stainless steel bow roller and several other modifications during his years cruising the boat. Gerry is now engaged in restoring Destiny to her former glory. More information is here.

Mike Snyder owns Distant Dreamer in Yokohama, Japan, where he lives. He has worked hard on her getting her in top shape. As he nears retirement he is considering putting her up for sale.