Columbia produced three versions of the Columbia 43: the original Mark I, a keel-centerboard version called Mark II and, after 1973, a Mark III. There's a lot of myth and misconceptions about the differences, especially between the Mk I and Mk III. I hope to cut through most of this.

Differences by the numbers

The following information came from two Columbia brochures. One is likely for the original model, which was offered as with a fin keel or with an abbreviated fin and swinging centerboard. The MkIII specifications came from a general Columbia brochure (circa 1974) which included the C-43 MkIII.

The big difference between the three Marks is in the keels. The Mark I has a cast-iron keel with an intricate shape when viewed from fore or aft. The Mark II has a keel stub, which houses a centerboard. The Mark III has a fiberglass and lead keel the same depth as the Mark I, but with a much shorter chord (the length between the front of the keel and its aft end).

The Mark I cast-iron keel has a beautiful shape that could only be achieved with a strong, heavy material like iron. It is narrow close to the hull to create a more hydrodynamic shape and then flares out near the bottom to put more weight lower increasing its leverage. 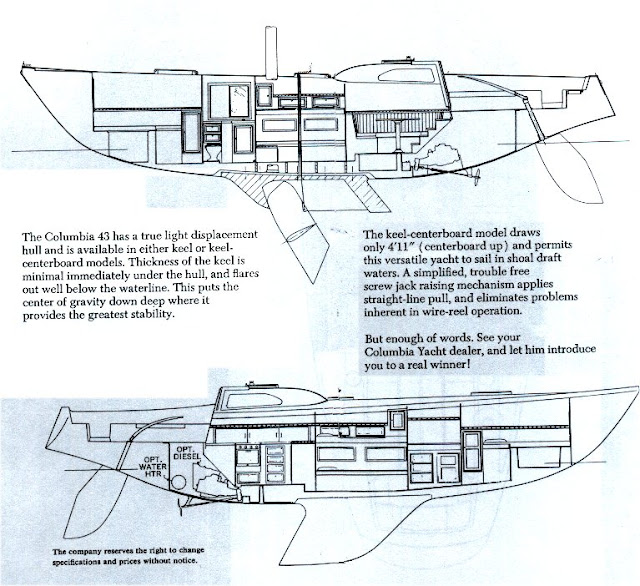 The designer of the Columbia 43, Bill Tripp, Jr., was rightly famous for his keel-centerboard designs, so you would expect that as an option. Of the three Marks, the Mark II is the most rare. It is also 1300-pounds heavier than either of the other two. I don't know how many Mark IIs Columbia produced, but I have never seen one offered for sale. I imagine the Mark II was somewhat more expensive than the Mark I. Unless shoal-water capability was critical, most owners would skip the extra initial expense and the added maintenance. The keel is the only difference between the Mark I and the Mark II.

When the Mark III came along in 1973 (four years into the production run) it had a new keel with lead ballast and a shorter chord. The lead ballast was necessary because the keel was smaller, which gave it less wetted surface. It also put the ballast lower to accommodate the six-foot taller mast with its higher-aspect rig and 5 percent more sail area.

The bow on the Mark I and II sweeps upward in a beautiful line typical of Tripp designs until it gets to within six inches of the deck, where it goes vertical at the hull and deck joint. I don't know why it was designed and built this way. It could be to keep the boat a half-foot shorter and thus make it rate lower under the CCA (Cruising Club of America) rule, or to make the hull and deck joint easier to build. For whatever reason, the beautiful line of the bow looks broken at the top.

The Mark III carries this line to its logical conclusion, thus lengthening the base of the foretriangle (and the total length of the boat) by six inches. While this improves the aesthetics of the boat, the real reason was to increase headsail area, thus making the Mark III more competitive under the new (at the time) IOR (International
Offshore Rule). Which brings us to...

The rig on the Mark III is closer to an early IOR rig than a CCA rig. The headsail area is larger because of the six-inch extension of the bow and a six-foot taller mast. Columbia shortened the boom on the Mark III to give the mainsail a higher aspect favored by the IOR rule. The total rig change increased the sail area of the Mark III from 810 square feet to 852 square feet, or about 5 percent. The lion's share of the increase was in the foretriangle.

The Mark I and II had the trademark long Columbia deadlight on the 43's small, gun-turret-style house. Most, but not all, Mark IIIs have two smaller rectangular opening portlights on each side.

What remained the same?

Just about everything: Same deck layout, same interior, same construction methods (except for the lead keel), same hull shape, same headroom, same cockpit configuration, in short, all the things that made the Columbia 43 the best selling of Columbia's big racing boats.

Columbia wanted a great race boat when it commissioned Tripp to design what became the Columbia 43. Specifically, Columbia wanted a boat that could win the Transpac, which starts in Long Beach, Calif., and ends in Honolulu, Hi. That's exactly what they got. In 1971, Encore (a Mark I), won her class in Transpac, and was eighth overall in the fleet. In 1973, after the IOR replaced the CCA as the official rating rule, Columbia introduced the Mark III to keep the model competitive a little longer.

Now that most sailing competition is handicapped under the PHRF (Performance Handicap Rating Formula) the boats are again winning silver. The Mark I has a PHRF rating of 102 and the Mark III has a rating of 96.

Which of all the three models makes a better boat? It depends on its intended use. Since most Columbia 43 owners use their boats primarily to cruise I would venture to say the Mark I gets the nod because of its smaller headsails, shorter mast and the longer, stronger keel. But many owners love cruising in their Mark IIIs. All three variations are on the mark.